€38.00
IN STOCK ONLINE
SKU
9961525
BioActive Q10 is a new product containing coenzyme Q10 in the reduced form, ubiquinol. Coenzyme Q10 occurs within the body in two closely related chemical forms, oxidised (ubiquinone) and reduced.... More details below
Skip to the end of the images gallery 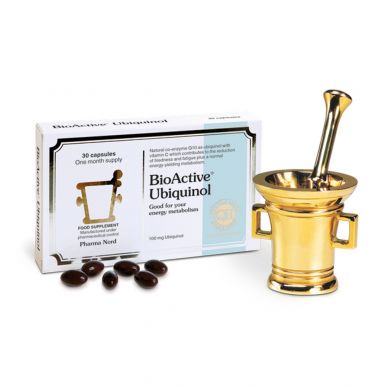 Skip to the beginning of the images gallery
Details
BioActive Q10 is a new product containing coenzyme Q10 in the reduced form, ubiquinol. Coenzyme Q10 occurs within the body in two closely related chemical forms, oxidised (ubiquinone) and reduced (ubiquinol). Until recently, coenzyme Q10 supplements were only available in the oxidised form as ubiquinone.

The reduced form of coenzyme Q10 is more important as an antioxidant than the oxidised form. Thus BioActive Q10 helps to maintain a healthy heart, muscles and immune system, all of which have a high-energy requirement, as well as a high antioxidant requirement. Directions: One capsule per day, or as directed by a physician.
More Information
Delivery and returns

Let's Stay in Touch
Stay up to date with offers, exclusives & new product launches
You can unsubscribe at any time. See our privacy policy for more information on how we use your data