Loading Product Discounts...
Skip to the end of the images gallery 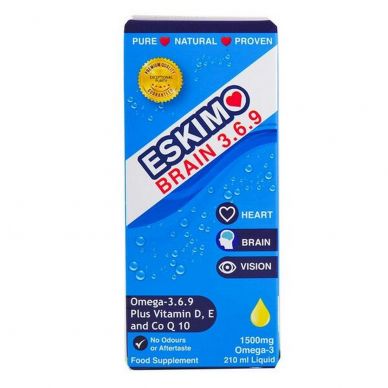 Skip to the beginning of the images gallery
Details
Eskimo Brainsharp liquid 210 ml (natural lemon flavour) combines the unique stable fish oil, Eskimo-3, with ingredients such as CoQ10 and GLA to optimise the brain and provide energy support. Omega-3 fatty acids have been well studied for their role in the support of many systems in the body including brain function.

This formula will suit anyone requiring additional support for healthy brain function.Eskimo Brainsharp contains Eskimo-3 fish oil. Derived from oily fish living in the deep seas of the Antarctic and South Atlantic, Eskimo-3 is one of the best researched and documented omega-3 supplements in existence.

Contains the important omega-3 fatty acids EPA and DHA in natural quantities. It has not undergone chemical modification. The beneficial effects of CoQ10 complement the formula with its ability to support energy production and act as an antioxidant to support the healthy brain. CoQ10 deficiency is common,especially among older adults. Contains omega-6 derived from evening primrose oil. Omega-9 (oleic acid) is a monounsaturated fatty acid, found in large quantities in the healthy Mediterranean diet.

The mixture of fatty acids, CoQ10, vitamin D and antioxidants can help to support optimal brain function and many other systems including cardiovascular and musculoskeletal. No fish odour or aftertaste due to its stability. Fish oils that smell and have an aftertaste are generally rancid. One teaspoon (5ml) daily with food, or as directed. Not recommended for haemophiliacs. Consult with a medical doctor if on anti-coagulant medication.
More Information
Delivery and returns